An aerial view of Aruza, Panama.

For indigenous Wounaan activist Donalds Negría, childhood was a hopeful time. He grew up by the Darien rainforest in the eastern Panama village of Aruza—just he and his mother Refenio—in a ranch home with a palm-thatched roof and a few acres behind the home, where Rufenia grew sugarcane, rice, and annatto.

Negría has many fond memories of the immense forest just beyond the rice fields. He remembers exploring it with other schoolboys, clearing a path through the thorny bramble with their machetes and then camping on the river banks, staring up at the stars through the breaks in the canopy until sleep overtook them. He remembers going in with his uncle, Leaso, who taught him to spear rabbits and wild birds.

But what Negría, a geographic information systems specialist for the Wounaan people, remembers most of all about the forest is the ferocity with which his mother defended it.

“She was an activist,” Negría says. “Ever since I was seven years old, mom would take me to meetings where she and other neighbors would talk about the people invading our land and cutting trees without our permission, and what we could do to stop it. I was witnessing the whole fight—the fight of my life—since as long ago as I can remember. She always told me, ‘This is a fight we have to win.’”

And so, Negría was heartbroken by a December 27, 2021 ruling made by Panama’s National Authority of Land Management (ANATI), which annulled Aruza’s territorial claim to 31 square miles (8,054 hectares) of old-growth rainforest. Because of an alleged fault in due process associated with Aruza’s collective title application, ANATI instead awarded individual titles to 72 colonizing families with no historical ties to the land.

Those colonizing families are expected to raze the forest for agriculture and ranching purposes, a tragically emblematic example of the threats to rainforest protection in Panama. Indigenous peoples in Panama are the nation’s best rainforest protectors, as proved by the fact that 94% of their territories remain forested—easily besting the nation’s 74% rate. As such, recognizing the Wounaan people’s historical right to their territory isn’t just a moral imperative. Protecting their rights and keeping these trees standing is one of the most cost-effective ways of defending the planet against climate change.

Leonides Quiróz, a Wounaan attorney who for years has represented Aruza and other Wounaan communities in their fight for land rights, is working tirelessly to reverse ANATI’s decision. Quiróz and his legal team, with support from Rainforest Foundation US and Native Future, have filed simultaneously appeals with both ANATI and Panama’s Supreme Court to reverse the land concession.

The deforestation that colonizers intend to bring to Aruza hasn’t yet hit full swing. With the rainy season drenching the Darien rainforest from March until November, tree removal will largely be stymied until the end of the calendar year. But trees have already been marked for removal. The clock is ticking.

With the destruction of their rainforest looming, Quiróz says that, “The situation in Aruza is very tense. Indigenous peoples have been asking the government to recognize their territory for years now. And these colonizers have come in—people who aren’t even from the area—and receive the land, just like that? It feels like a bomb has gone off.”

That “bomb” could be a dangerous precedent. Aruza’s land claim was made through Law 72—a 2008 governmental decree that was supposed to make it easier for indigenous communities in Panama to claim collective title to their forest territories, but has instead created limbo for the communities it is ostensibly serving. Of the 29 communities that have filed for collective title under the law, only five have been granted titles.

Aruza’s approximately 400 inhabitants filed for collective title in 2012. The denial of their application is the first of its kind. It’s a setback that threatens not only Aruza, but the other 23 communities awaiting decisions on their own applications.

The Aruza decision is doubly devastating because their territory sits in the Darien Gap. The forest they’re protecting is an important buffer between the agricultural development encroaching upon eastern Panama and Darien National Park. As part of the Darien Gap, Aruza’s forest helps divide North and South America, serving as an important ecological and epidemiological bulkhead. The further thinning out of this forest would not only be a blow to Aruza’s people, but to the fight against climate change, and to the countless endemic species that call the Darien home. It could also deliver a rash of illnesses to both North and South America.

But there’s reason for optimism that the decision could be reversed. The government of Panama has in recent years shown increasing willingness to recognize indigenous peoples’ land rights. In 2020, Panama’s government recognized the land rights of the indigenous Naso people, acknowledging their 617 square mile (160,000 hectares) territory—an area twice the size of Shenandoah National Park. The following year, at the United Nations’ climate conference (COP26) in Glasgow, Scotland, President of Panama Laurentino Cortizo gave a speech acknowledging the importance of indigenous peoples in protecting rainforests and staunching the climate crisis.

Negría, for his part, is tempering grief with resolve.

“The day we found out, I just cried all day,” Negría said. “I thought about my uncle, my mom, and all the others who died before this decision was made. They fought for these forests their entire lives. The day after that, I got to work.”

Growing up, Negría says he remembers the deep reverence he and the other Aruza residents would show to the largest trees of the forest.

“When we see enormous trees, we never cut them down because ancestrally, spiritually: We believe it’s part of our mother. But these big companies, they want to come in and cut down everything. And it’s not right.”

Adds Quiróz, “It’s a dark chapter, but it’s not over. We will win.” 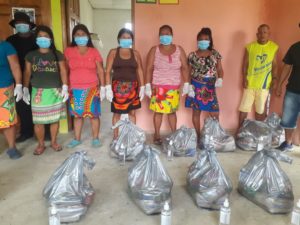 Stepping Into the Gap: Lessons from the Darien in the Face of COVID-19 and Indigenous Peoples’ Response

A look at how viruses have shaped the Darien Gap and its indigenous inhabitants.