Pucallpa, Peru – In recent years, the dangers faced by indigenous communities of the Ucayali region of Peru have worsened, putting the lives of leaders and community members at risk.

Activities such as logging, illegal mining, territorial invasion, and deforestation have generated great concern among the region’s communities. Peru’s Ministry of Environment reported that Ucayali saw the highest percentage increase in deforestation of all Amazonian regions at 32% between 2019-2020 and, worse, 81% over the period 2018-2020.

As communities seek to protect their lands from illegal invasions, threats to environmental defenders are on the rise. One report noted that although the National Registry of Human Rights Defenders of Ucayali’s Ministry of Justice has 21 defenders registered, the count should be at 113 defenders.

Until recently, options for how communities can detect the location of territorial threats and report them to state authorities have been limited.

For this reason, the Regional Organization of AIDESEP in Ucayali (ORAU), the region’s indigenous peoples’ representative organization, established its first indigenous-led satellite information center and data hub “Imenko Tsiroti” with the support of Rainforest Foundation US (RFUS).

“The name ‘Tsiroti’ is an Asháninka word referring to a forest bird that sings so loudly, the entire community knows where it is. It is our messenger bird that protects us, just like our satellite information center will. Thanks to this center, we will have maps and data that can alert the entire community of the threats they face so that they can protect themselves,” said Berlin Diques, president of ORAU. In English, Imenko Tsiroti means ‘the nest of the paucar,’ or yellow-rumped cacique.

The center was inaugurated by ORAU’s board of directors with much fanfare at ORAU headquarters in Pucallpa on Saturday, March 12th, 2022. The ceremony was attended by Jorge Perez Rubio, president of the Interethnic Association for the Development of the Peruvian Rainforest (AIDESEP); Suzanne Pelletier, executive director of RFUS; and various indigenous community leaders from across the region, including leaders of the Federation of Native Communities of Iparia District (known by their acronym FECONADIP) and the Indigenous Development Organization of the Masisea District (ORDIM)—two among many federations represented by ORAU.

“For us, having this indigenous-led satellite information center in ORAU will be a great help. We will no longer have to wait a long time or pay large sums of money to obtain location maps of our own communal territory,” commented Judith Nuntha, an indigenous Shipibo member of ORAU’s Board of Directors who will serve as the indigenous coordinator of the Rainforest Alert network in Ucayali.

“We’re encouraged because we know that Tsiroti is going to equip the communities of Ucayali with the tools and knowledge needed to keep their families safe and their forests secure. We hope your success helps expand this work to all communities across the Peruvian Amazon,” offered Jorge Perez Rubio, president of AIDESEP, a national indigenous peoples’ organization representing indigenous peoples across all regions of the Peruvian Amazon.

“We’re honored to join ORAU in launching this new center. We’ve seen from our experience with ORPIO in Loreto that when communities have access to the right tools and support from partners and law enforcement authorities, they defend their rights and effectively reduce deforestation—sometimes halting it altogether,” commented Suzanne Pelletier.

During the inauguration, ORAU representatives unveiled maps indicating threats experienced by ORAU’s federation members and the violence against indigenous defenders of their territories. They also showed maps tracking roads that are illegally encroaching on and allowing greater access for deforestation of their communities’ territories in the Amazon. The mapping tools and high-tech equipment will also allow for the registration of ORAU’s federation members’ territories currently awaiting recognition and titling.

The center will meet the demand for satellite-derived data and other territorial data from the indigenous peoples of Ucayali, including communities that have adopted the Rainforest Alert system of community-led territorial monitoring. Co-developed by the Organization of the Indigenous People of the Eastern Amazon (ORPIO)—ORAU’s counterpart in Peru’s Loreto region—and Rainforest Foundation US, that system was examined in a peer-reviewed study in a 2021 special edition of the Proceedings of the National Academy of Sciences. Results from that study showed that, in the first year alone, the Rainforest Alert system allowed communities to successfully reduce forest loss on their lands by 52 percent.

The inauguration of the indigenous-led satellite information center “Imenko Tsiroti” in Ucayali marks the first major expansion of the program beyond Loreto. Miriam Sanchez, an indigenous Shipibo from the region, who serves as the hub’s trainer bringing the technology and capacity to the region’s communities, will be responsible for analyzing the deforestation of indigenous peoples’ territories with tools such as Global Forest Watch.

Members of the Regional Organization of AIDESEP in Ucayali (ORAU) at the Imenko Tsiroti launch. IMAGE CREDIT: Katya Zevallos 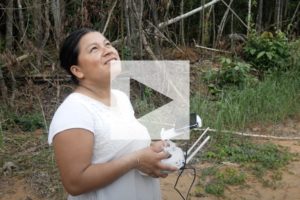 How a recent study showed that putting technology in the hands of indigenous communities can reduce deforestation, coauthored by Global Forest Watch and Rainforest Foundation US.