Rio de Janeiro, Brazil – On June 21st, major international artists will join in solidarity with indigenous peoples for a livestream concert to raise awareness and support for indigenous forest guardians under extreme threat from the coronavirus.

All net proceeds from the event will go directly towards the COVID-19 relief effort in rainforest areas and on projects and advocacy to support indigenous and local communities in their efforts to protect their environment (3).

The livestream will be broadcast on TikTok, YouTube and other platforms in Brazil and around the world: 3:00pm New York City and Manaus, 16h00 São Paulo, 20h00 London and 21h00 Oslo.

In addition to broadcasting the livestream, TikTok, the platform for short cell phone videos, has committed to donate up to $300,000 to the SOS Rainforest LIVE event through livestream viewership and by hosting a dance challenge following an official SOS Rainforest Dance. All dance videos uploaded to the platform between 21-28 June 2020 that include the hashtag #SOSRainforestChallenge will qualify. See more dances on Rainforest Foundation’s TikTok account.

With destruction of tropical rainforests a key driver of global emissions, biodiversity loss and increasingly linked to disease outbreaks, protecting these forests is more critical than ever. Evidence is building that the best way to achieve this is to empower indigenous peoples and other forest guardians to secure, manage and protect the rainforests they call home (4).

But while the world is looking elsewhere, many areas are witnessing a surge of forest destruction and land invasions from illegal miners and loggers – further exposing local communities to COVID-19 and exacerbating the climate crisis.

Suzanne Pelletier, Executive Director of Rainforest Foundation US, said “indigenous peoples are among the most vulnerable to the novel coronavirus due to their greater susceptibility to respiratory and viral diseases and poor access to adequate medical facilities. Yet they are the ones protecting the ecosystems that safeguard the world from the rise of major pandemics in the first place. We must join together to support indigenous peoples now.”

Learn more and participate at: SOSRainforestLive.org

Rainforest Foundation was founded 30 years ago to promote the rights of indigenous peoples living in the rainforest and to support them and other forest communities in their effort to protect and defend their territories. Since its founding, the Rainforest Foundations of Norway, the UK and the US have together supported indigenous peoples’ efforts to protect more than 72 million hectares across four continents.

(2) SOS Rainforest LIVE will have the distinguished presence of indigenous peoples’ and other environmental defenders from the world’s major tropical rainforests including : Sonia Guajajara from the Articulação dos Povos Indígenas do Brasil (APIB) and Dario Kopenawa Yanomami from Hutukara Associação Yamomami from Brazil and Rukka Sombolinggi of the Indonesia’s Indigenous Peoples’ Alliance of the Archipelago (AMAN), among others. The event will also feature messages from experts such as renowned climatologist Antonio Nobre and high-profile figures such as photographer Sebastião Salgado and Wagner Moura. The event will be co-hosted by Oona Chaplin of Game of Thrones and Avatar, and Brazilians Letícia Sabatella, Camila Pitanga, Maria Gadu and Toni Garrido.

Inquiries in Other Languages 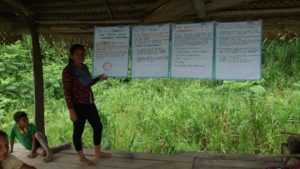 Rainforest Foundation US is working with COONAPIP to develop an online map to coordinate COVID-19 humanitarian aid to indigenous communities in Panama.